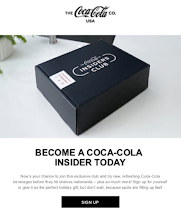 How did you sign up for the Coca-Cola® Insiders Club?

On December 8, 2020, I signed up for the Coca-Cola Insiders Club Membership via an email link from The Coca-Cola Company:

Can I still sign up for the Coca-Cola Insiders Club?

No, apparently the three-month subscription for 2021 is sold out, but you can add your email to the waiting list for the next one.

The Coca-Cola® Insiders Club Has Sold Out

We've filled every spot for this three-month run of the Insiders Club, but you can still join the waitlist for future spots.

How much did you pay for the Coca-Cola Insider's Club membership?

Did you get a special reward for being one of the first people who signed up?

Yes, on January 2, 2021, I received my first package.  Inside the package were an insert and a 20-oz bottle of POWERADE® ULTRA Strawberry Lemonade.

POWERADE wants to reward you for being one of the first to sign up for the Coca-Cola Insiders Club, so we're giving you this special bonus box ahead of your first official Insiders Club box in January. Enjoy more hydration, more electrolytes and zero sugar with new POWERADE ULTRA Strawberry Lemonade - the replenishing power of POWERADE with premium ingredients like creatine, BCAAs, B vitamins and 50% more ION4 electrolytes.

IT'S TIME TO PUSH YOUR HYDRATION AS YOU PUSH YOURSELF.

Strawberry Lemonade apparently is a new flavor of POWERADE ULTRA which has not yet hit the shelves since the Product Website does not show where it is sold.

When did your first month box arrive ? 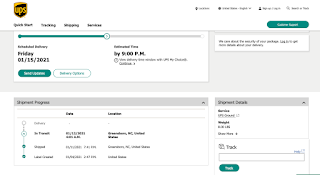 I received an email on January 12 that my January #insidersclub box had shipped and the box contained three new products.

What's in the package for January?

In addition, a smaller white box with red lettering that read "But Wait, There's More." The box contained a black fanny pack made from recycled PET bottle with "The Coca-Cola Co. Insiders Club" logo, two small packets of Hi-C drink mix packets and a deck of miniature playing cards in the shape of a contour bottle.  The two Hi-C singles-to-go flavors were "Flashing Fruit Punch" and "Grabbin' Grape".

Lastly there is a full-color insert with one side describing the content of the box and the other side with a word search puzzle.

When did your second month box arrive?

The Coca-Cola Insiders Club second month box was shipped on Monday, February 15, 2021 and arrived one week later on Monday February 22, 2021.  The February box dimensions were identical to that of the January box.

What's inside the February box?

When did your third month box arrive?

The final Coca-Cola Insiders Club box was shipped on February 26 and arrived March 4, 2021.

What's inside the March box?