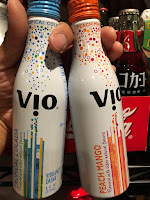 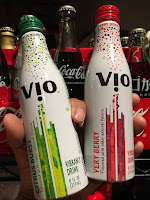 I'm not sure what GAN stands for, probably Graphic Artwork Number, a unique number that The Coca-Cola Company assigns to each of the artwork design used on its product packages produced in the U.S. including glass, PET and aluminum bottles, aluminum bottle tops, aluminum cans, paper carriers, multi-pack boxes, tetra-paks, and others. Some packages show two GANs, one for the package itself and the other for the additional promotional artwork. 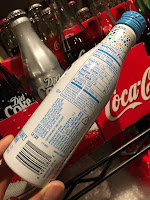 The GAN is usually found near the UPC code or the bottom of the artwork panel.

Retail price for a bottle of Vio is $3, the same as the Coke Trio (Classic, Diet and Zero) in the sleek aluminum bottles.  You may also purchase Vio in packs of 12 for $25 on Amazon.com

Vio is produced by neXstep beverages LLC, a subsidiary of The Coca-Cola Company based in Houston, Texas. Since its debut in July 2009, Vio is only available in the Big Apple. For a list of the retailers, check out the official website: http://www.viovibe.com and follow @VioVibe on twitter for free samples in New York City.
Newer Post Older Post Home