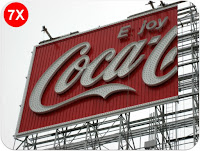 Ninety years ago in Utah, Tom Young borrowed $300 from his father to start a company that specialized in lighted signs and painted wall signs.  A few years later, Young's company sold neon signs throughout Utah, Idaho, Wyoming and Nevada and was renamed Young Electric Sign Company (YESCO) in 1925.

YESCO installed the famous 75-feet tall Vegas Vic in Sin City in 1951 and the Welcome to Fabulous Las Vegas sign in 1955.  Many more signs on the Strip as well as other landmark signs were also designed and installed by YESCO in the decades to follow.

On top of a three-story building at the corner of Bryant and Fifth Streets in SOMA, a 70-feet-by-30-feet LED sign was installed during the wintry December weather of San Francisco.  The new energy efficient sign replaced an earlier neon sign of similar dimensions that advertised "Coca-Cola" in the familiar Spencerian script facing the San Fracisco Bay and "diet Coke" facing the Pacific Ocean. 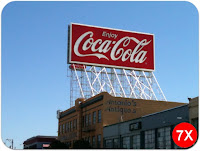 According to Helen Tarleton, Senior Communications Manager of Public Affairs & Communications at The Coca-Cola Company, "The diet Coke logo on the  previous sign was out-of-date. Since the logos for [Coca-Cola's] other brands (outside of Coke) have changed and may continue to change in future, it was decided to use Coke on both sides since it is essentially timeless and would keep the sign current."

In last November's announcement of the double facelift of the landmark sign, Coca-Cola said that the first billboard appeared atop the building at 701 Bryant in 1937, the year after the San Francisco-Oakland Bay Bridge opened.  The outdoor sign greeted motorist coming into the city from the Bay Bridge.

The original billboard probably read "Drink Coca-Cola" instead of "Enjoy Coca-Cola."  I found an old photo of the building from 1947 but unfortunately it did not show the billboard.  There was however a smaller sign on top of T & L Restaurant across the street at 498 Fifth Street.  The sign had a hand holding a Coke bottle with the caption "Drink Coca-Cola - It's the Real Thing."  Click here to see the image in the San Francisco Historical Photograph Collection. 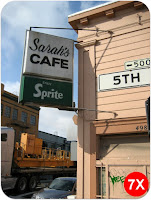 The Coke sign at 498 Fifth Street is no longer there today, but there is a Sprite sign advertising Sarah's Cafe hung from the corner of the building.

The buildling at 701 Bryant Street according to city records was built in 1926.  Its ground floor is occupied by Antonio's Antiques.  The second and third floors are vacant and available for lease.  Wouldn't it be cool to have a World of Coca-Cola attraction in this building.  Just follow the double-sided Coca-Cola LED sign!
October 26, 2020 Update - according to the article on SFGate, Coca-Cola has decided not to renew the lease for the billboard sign and it's being removed at a cost of $100,000.  Farewell!
Newer Post Older Post Home